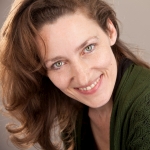 Twyla Hafermann is an acting and musical theatre teacher, audition coach, and director in
Newtown, Connecticut. She received her BFA from the University of Evansville, Indiana and
her MFA in Acting from NYU Tisch School of the Arts in New York City. Twyla has worked on
the stage professionally as an actress in many regional theatres and festivals, some of which
are, Actors Theatre of Louisville, The Humana Festival, Cleveland Play House, San Diego
Repertory, the Maryland and Utah Shakespeare Festivals, and the New Harmony Project. She
also made several television appearances on One Life to Live. She originated the roles of
Caitlin in the play Gunshy and Cory in the play Private Eyes. She has taught improv for the
organization, Spark; directed plays for Parks and Recreation in Newtown: and directed plays at
the Newtown Middle School and the Newtown Intermediate School. Twyla currently works to
creatively inspire children 4 years of age to 18 years of age with teaching musical theatre and
directing shows for Dance Etc.; teaching and directing plays for the Community Learning
Project, a homeschooling community, in Newtown, CT; directing the Newtown Intermediate
school play; and by helping to facilitate the Isle of Skoo for The Ben’s Lighthouse organization.

Your ticket for the: Twyla Hafermann