A Rare and Intimate Benefit Evening with JOAN OSBORNE 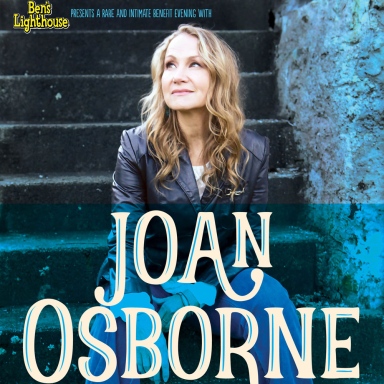 Ben’s Lighthouse is honored to invite you to a uniquely memorable evening with Joan Osborne on Saturday, September 14th — a rare opportunity to enjoy her music in an intimate house concert setting.

Joan Osborne has been called “the most gifted vocalist of her generation and a singer who understands the nuance of phrase, time, and elocution” by AllMusic.

While she may be best known for the 90’s hit “One of Us”, Osborne has been nominated for numerous awards including a 2013 Grammy nomination for Best Blues Album. She has played the Grand Ole Opry and toured alongside the Grateful Dead, the Dixie Chicks, the Funk Brothers, and many more.

In 2017, Osborne released the critically acclaimed album “Joan Osborne Sings The Songs Of Bob Dylan”. As she put it, “…there’s a lot of uncertainty and fear about what’s happening in the world…We need to hear our great writers and poets talking about these times.”

We hope you will join us and Joan Osborne on September 14th for what is sure to be a meaningful and memorable event. Ticket price includes cocktail hour with hors d’oeuvres, performance and meet & greet with the artist.

Register for Event: A Rare and Intimate Benefit Evening with JOAN OSBORNE

Make sure to copy Registration number after successful submission.

Thank you for payment.

Your ticket for the: A Rare and Intimate Benefit Evening with JOAN OSBORNE

A Rare and Intimate Benefit Evening with JOAN OSBORNE